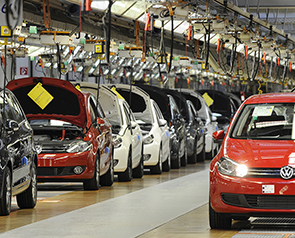 Automotive industry is one of the most important industries in every country that plays a significant role in economic growth. Automotive industry has been the most important driving/motive force of economic development in twenty century and Peter Drucker has referred the automotive industry to “industry of industries” and it accounts as one of the most important indicators of industrial development. If we look more accurate at automotive industry in pre islamic revolution interval, it clearly shows that Iran had thoughtful, systematic and codified policy and planning in this period. Also automotive industry has had remarkable and continuous progress in post Islamic revolution period so that Iranian auto manufacturers have partially reached to self-sufficiency by helping the government in producing some automobile brands and contributed to economic growth simultaneously in Iran.
It is obviously clear that automotive industry has still room for more quantitative and qualitative advancement and improvement in all areas and it is concluded that Iran’s automotive industry has a great opportunity for well-known foreign auto makers for active presence in Iran marketplace. Normally, one of the major problems in automotive industry in Iran is high final price along with high import tariffs ( prices are determined several times higher than other countries and the maximum tariff rate fixed on 55 percent for 2016 while this maximum rate is 25 percent for neighbor countries ), so that a few section of society have sufficient purchasing power for buying automobiles with high quality and standards, especially import ones which have no affordable prices.
Auto part makers have had exponential and unprecedented growth after imposed war in Iran and also the specially government has supported this trend continuously and helped in developing mentioned industry much more than ever. There is a big challenge from consumers’ point of view so that customer expectations have always been more than features that products usually offered, main problems which caused dissatisfaction include : unacceptable and low product quality, high final price and poor and unfavorable after sales services, so this dissatisfaction has been one of the strongest factors of consumers’ tendency to foreign-made automobiles usage.
However, import of foreign-made automobiles has had ascending and growing trend in recent years, in the meantime Chinese auto makers have appropriated a large section of market share, but these auto makers have not been often faced with the public attention and Iranian people have not necessary trust to them due to expensive and poor after sales services and guarantees despite attractive looks and acceptable and competitive prices. It seemed that in domestic automotive industry, the public regard to long-term purchase contracts, also competition has become based on quality, engineering capabilities and timely product delivery after post sanction era.
According to Iran customs, the value of Iran’s automotive industry import and export ( incl. auto parts ) in 2013 were more than 2.4 billion and more than 263 million dollars respectively that these amounts in 2014 were more than 3.5 billion and more than 243 million dollars respectively. It is notable that the amount of import in 2015 reached about $ 1.2 billion and the amount of export in first semester of 2016 amounted to more than $ 158 million , so the import reduction trend continued from 2015 and the export trend soared from the beginning of 2016, these facts bring about favorable and suitable news for domestic automotive manufacturers.
The Iran’s huge automotive marketplace is a great and untapped one that has numerous opportunities and will require heavy and planned investments, it is sufficient to express about these opportunities that more than 150000 automobile were pre-sold during an announcement with initial registration between two domestic auto makers and Iranian people which lasts a few days in 2015 and this sale contract stopped due to intense demand since auto makers be able to accomplish their commitment. It is notable that travels which occur between cities have had considerable and rapid growth especially in holidays in Iran and this great enthusiasm requires high quality, flawless and equipped automobiles that looks there is a valuable opportunity for auto makers which observe Iran marketplace.
So, It is necessary that foreign investors make particular and great attention to the special situation of Iran automotive marketplace that can provide appropriate products for the public, meet the needs and achieve prosperity too.